Stocks continued to move higher last week in the run-up to the Labor Day weekend holiday with the month of August bucking the historical trend of being a down month. The S&P 500 index and Dow both gained about 3% and the Nasdaq ripped 5.8% higher in August! On the other hand, the EAFE Euro Stoxx 600 index sank over 2.35% in August with the major Wall Street firms pounding the table to diversify into overseas equity markets which we know has been a big mistake for their investors. If you have international stocks or funds in your portfolio, give us a call at 732-888-4994 for a complimentary review of your investments if you are not already a valued client of Castle Financial.

Most big Wall Street firms simply don’t get it with a “hard” Brexit (England leaving the European Union) looming without an agreement in place one of the many risks that have led to 25 straight weeks of outflows from European stocks. These outflows have wiped out all of 2017’s inflows of money with some individual investors left holding the bag. Italian budget worries, unimpressive economic growth, trade tensions, and the rise of nationalist parties have also put pressure on European stocks in 2018. Asian markets also sank in August with the Hang Seng losing 2.43% and Shanghai tanking 5.25% for the month of August. The Shanghai Composite Index is one of the most closely watched global benchmarks. Although it was created to track the performance of China's largest companies, investors tend to use it to gauge the health of the entire Chinese economy. Japanese stocks finally gained some ground moving the benchmark Nikkei 225 Stock average into positive territory, but up only 1.38% year-to-date.

The U.S. equity markets have clearly been the place to be invested in 2018 versus the rest of the world. While just about every major U.S. index is either at or right near new record highs, overseas markets are languishing. I would caution our readers that if they decide to go bottom fishing in the global markets, remember in many cases you are investing in downward trending stock markets. Accordingly, I recommend that you wait until you have confirmation that there is a turn back into bullish mode before thinking about investing your money. The MSCI World index looks horrific trending lower nearing a fifty-two week low as noted in the following chart from Bespoke: 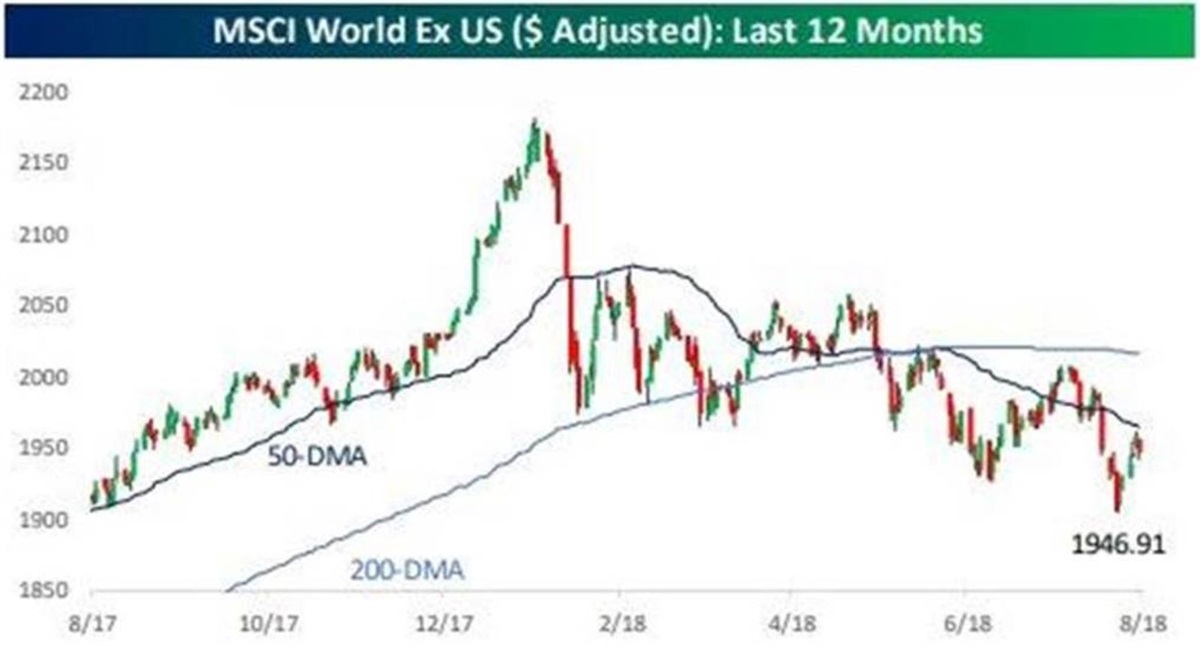 On the other hand, with 99% of U.S. companies in the S&P 500 having reported for the second quarter, earnings per share for the group increased by 25% when compared with the same quarter a year ago which is a similar showing to the first quarter and the fastest growth rate since the third quarter of 2010. Moreover, 80% of S&P 500 companies beat analyst estimates this quarter and revenues expanded about 10% year over year. You see, corporate earnings and the direction of equity markets are highly correlated. The forward twelve-month price earnings ratio or PE for the S&P 500 is 16.8. This ratio is above the five year average of 16.3 and above the ten year average of 14.4, so we are going to need corporate earnings to continue to grow for stock indices to move higher.

At the sector level, the Healthcare (84%) and Information Technology (82%) sectors have the highest percentages of companies reporting revenues above estimates, while the Consumer Staples (56%) sector has the lowest percentage of companies reporting revenues above estimates. Accordingly, working with an advisor who allocates towards leading sectors can boost returns. In addition, earnings momentum drives stock prices higher, not headlines which we have seen time and time again prove to be temporary distractions. Of course, valuations are also important and the major indices sell for the same PE multiples as they did back in January while the ten year Treasury bond yield forward multiple is considerably below its long-term average. For a forward-looking investor, I think the present market valuation is far from expensive and might even be viewed as cheap relative to bonds. The bond market, as measured by the bond fund, symbol AGG, gained .57% in August but is still down 1.1% year-to-date.

As we look to the future, there are indeed historical indicators that favor the bullish trend in stocks continuing and I believe that this earnings-driven secular bull stock market has more room to run. In past updates, I have written about a possible “doubleheader” bull stock market and it appears to me that the second bull stock market “game” may have started. With a pro-business administration in the White House and tax cuts now kicking in, corporate earning appear to be heading even higher. The ghouls in the media will keep pounding the negativity and distraction drums, but if we turn off the noise we can see that “ I have to admit it is getting better, a little better all the time” (words from one of my favorite Beatles song). The negative-nellies will continue to warn about impending doom and gloom (fear and greed sell news copy). On that note, one indicator to look at for signs of a looming recession is the leading coincident indicator ratio, which on average peaks about two and a half years ahead of a recession as noted in the following chart which is NOT signaling a recession at this time. 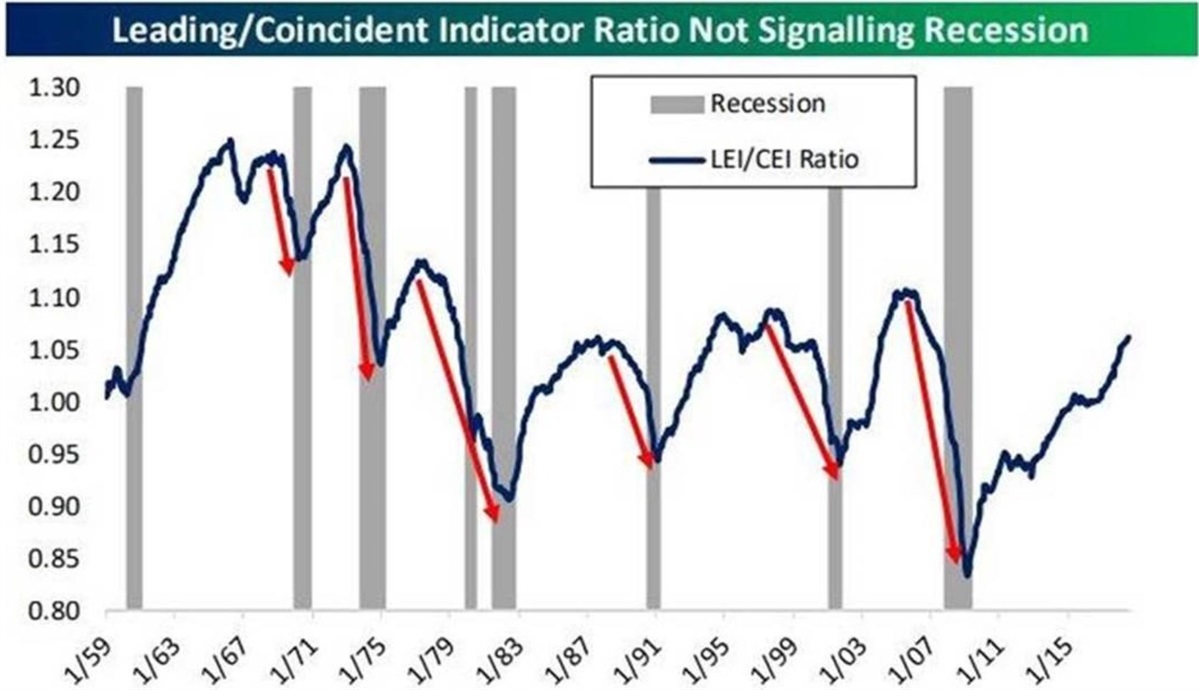 Let’s focus on some of the positives like the unemployment claims four-week average which is the second lowest in 49 years as noted in the following chart: 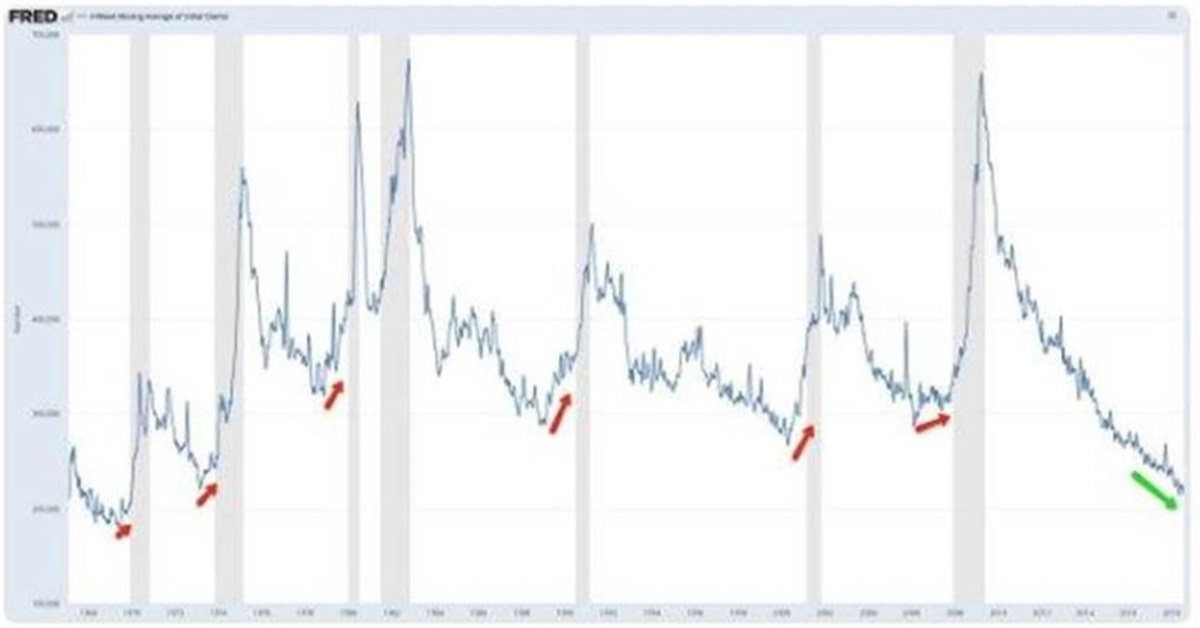 Another positive in the U.S. economy was Industrial production gaining 4.2% in July hitting a new all-time high as noted in the following chart:

In addition, the second read on the second-quarter GDP came in at 4.2% and the trajectory of growth is still very positive. Excluding inventories from quarterly growth, this was the best quarter for GDP since the first quarter of 2006 and the U.S. consumer confidence jumped to a new eighteen year high! The U.S. percent of world market capitalization has topped 40% for the first time since 2005. A consideration in that major move higher for the U.S. is the fact that China has fallen from over 10% down to 7.5%, leaving China in third place behind Japan. Also, when major stock indices are moving higher in sync as noted in the following chart, it is a sign that more highs in stock markets are forthcoming. 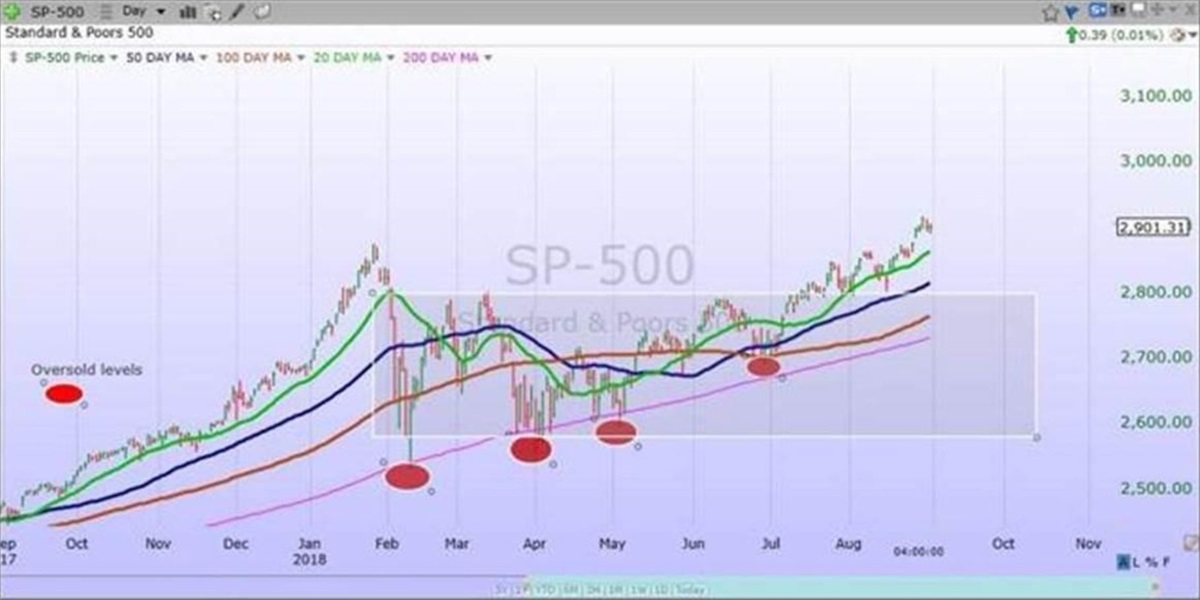 There is a legitimate debate as to whether the current bull stock market run is the longest on record and I am getting tired about hearing that the current run conjures up the notion that the bull stock market may be ending simply because of the length of the run. Accordingly, please observe the following chart and note the two prior stock market tops in 2000 and 2008 having very clear signs that warned of indices weakening with trend lines flattening instead of going higher which are NOT present at this time as noted in the following chart:

Looking ahead, investors will turn their attention to third-quarter earnings reports and corporate outlooks for 2019. Trade issues, including NAFTA (North American Free Trade Agreement) negotiations, and trade discussions with both Europe and China, will continue to influence stock and bond market volatility. Also, investors will closely monitor the upcoming mid-term elections and the potential shift in party control of Congress. These events have the potential to create market volatility, however worldwide economic growth remains the primary driver of equity markets. Valuations continue to rise, but not excessively and the positive bias heading into the Fall reflects the combined influences of moderate inflation, interest rates, and market sentiment.

Gold - The dollar remains the primary driver of the metals market, especially gold, so the weakness in the greenback( thanks to easing trade war angst) was a further tailwind for the beaten-down yellow precious metal pushing gold back above $1200 a troy ounce. However, for the month of August, the price of gold declined about 2% and is down about 8% year to date as noted in the following chart. 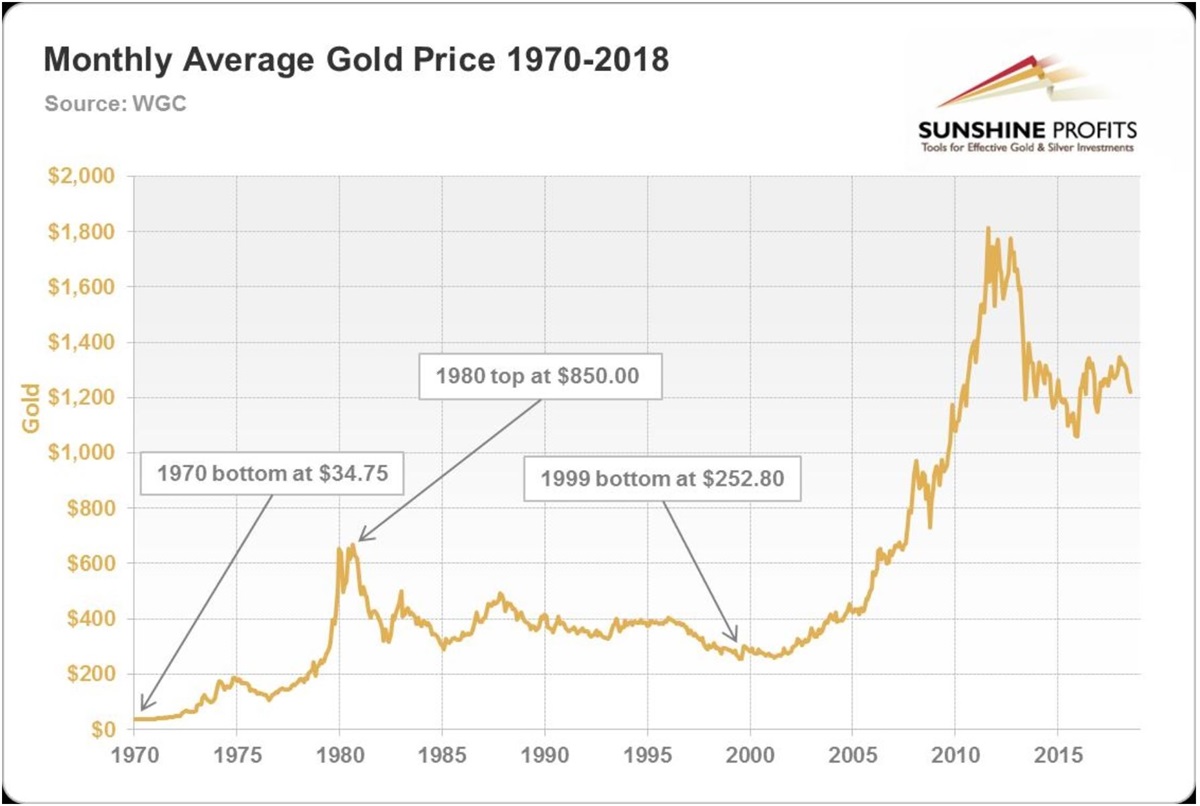 Black gold - Crude oil closed back above $70 a barrel as storms, both real and politically, started to develop. Prices were on the rise after the U.S. oil supply fell 2.6 million barrels last week, which raised even more concerns about the market’s ability to replace plunging Venezuelan oil production and Iranian exports that reportedly already are facing falling oil supply. Now, you get Mother Nature involved with more storm activity brewing out in the Atlantic, and you may have a very bullish outlook developing. Oil prices managed to rise about 1.5% in August and are up about 15.7% year to date.

Call us if you need help. We will be happy to schedule your complimentary and valuable second opinion consultation. Feel free to visit us atwww.castlefinancial.com and take advantage of the many valuable updates and videos under the “Resource Center” links.

As a “fiduciary” and objective “fee-only and no commission firm” with our clients best interests and needs at heart, Castle Financial is a leader in wealth advocacy offering financial, retirement, estate planning and portfolio design and management services. We have offices in New Jersey, New York City, Naples, Florida and also enjoy serving clients throughout America. We are as close as your telephone or mobile devices, so call 732-888-4994 for a complimentary consultation.

What to expect when you call - A professional and a courteous staff member will schedule your complimentary consultation with no obligation or pressure. We are not captive representatives of any bank, insurance or investment company and we are not in the business of selling you financial products or steering you toward particular investments because of some benefit we might get on the front or backend. We are “fee-only” advisors free to recommend the investments that are in your best interests. As “fiduciaries” we are held to a highest legal standards and we are passionate about helping our valued clients achieve their aspirations and financial goals.

On a personal note: Castle Financial is a family owned and operated company. Al Procaccino II, Castle’s founder, is happily married with two wonderful daughters. He loves his pets, enjoys music, reading, swimming, golf, college sports, biking, cooking, model railroading, and chess. Al supports many charities and also serves on the Board of Room In Our Hearts, a nonprofit organization dedicated to helping families whose homes have been affected by .