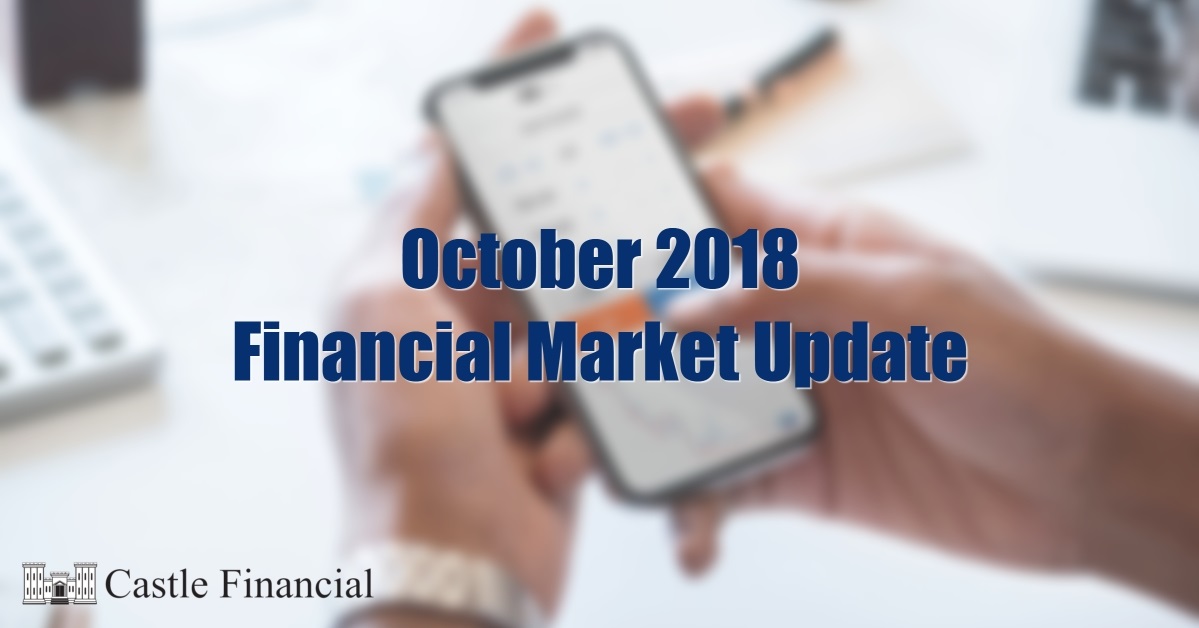 What a wonderful period the third quarter of 2018 turned out to be for the major stock market averages. The Dow gained over 9%, the S&P 500 rose 7.7% and Nasdaq added over 8% with all indices hitting record highs. One has to wonder how long this party will last.

In last month’s update, I advocated that readers ignore the ghouls in the media who attempt to sell newsprint with negative stories. Instead, I alluded to a possible “doubleheader” bull stock markets with another bull stock market run following an intermission. Yes, stocks have had a great run, but we cannot ignore the ongoing record corporate profits and pro-business administration in the White House. Time will tell if the Ronald Reagan style 2.0 growth agenda on steroids works. For the sake of all investors and citizens, let’s hope it is successful. The massive and growing global Government debts can only be paid off at this point through economic growth and long overdue fiscal government debt constraints to control the out of control spending by inept and corrupt governments throughout the world that has been going on for far too long. 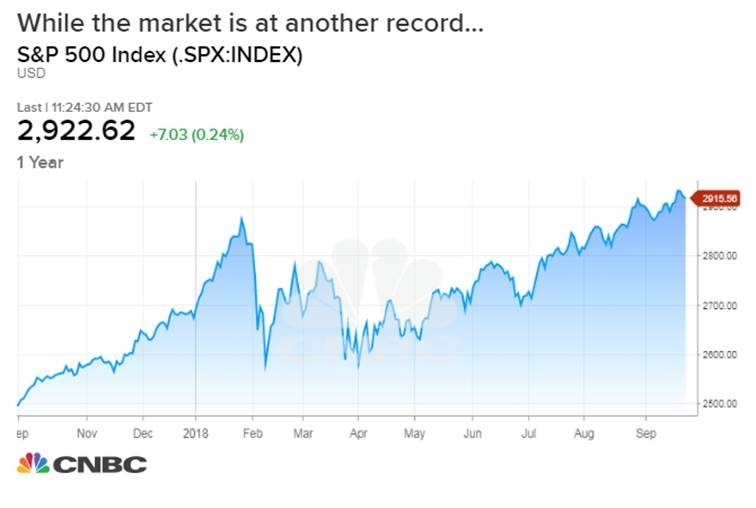 For the month of September, the Dow and S&P 500 rose 1.9% and 0.43%. The Nasdaq fell about 0.5% and Russell 2000 declined about 2.5% for the month. Overall, favorable economic data and news about trade, Brexit and the OPEC meetings headlined the month, and of course, there was the circus in Washington around the appointment of a new supreme court judge. Oil prices rose about 5% in September as OPEC and Russia decided against production increases to compensate for the impending loss of Iranian oil when the November trade ban takes effect. Analysts, in questioning OPEC’s capability to increase production, are increasingly speculating about the potential for oil prices to reach $100 per barrel. However, I would not bet on it with U.S. production now countering the games of the past by foreign oil producers which no longer hold a noose around America’s neck.

The U.S. is trying to level the global trade playing field with tariff negotiations. Things seem to be going well with the U.S. and Canada. They reached a dramatic, last-minute deal late Sunday night on revising the North American Free Trade Agreement (NAFTA), lifting a cloud of uncertainty over the quarter-century-old continental commercial bloc. The pending agreement will allow Canada to join an accord reached in late August between the U.S. and Mexico and diminishes the prospects for President Trump to follow through on his threats either to kill NAFTA outright or to break the trilateral pact into separate pieces.

China, however, is playing hardball and has canceled upcoming high-level trade talks after the U.S. imposed its latest round of tariffs last Monday. China comically published a white paper which attacked the "protectionist" and "trade " practices of the U.S. administration, which is hysterical in light of China’s decades of lying and cheating on trade and stealing of U.S. intellectual property. However, I am optimistic that cooler and more rational heads will prevail and the U.S. and China will ultimately sign fairer trade agreements.

The U.S. did sign a trade agreement with South Korea and agreed to begin negotiations with Japan on a new trade pact. Stay tuned, but I think somehow things will work out with global trade.

The upcoming earnings season will add color to the generally favorable outlook of the global economies. However, some economists anticipate a reduction in global growth due to trade concerns and the impact of lower demand in emerging countries if oil prices continue to rise. After consecutive quarters of near-record profit growth, companies are starting to lower expectations.

With third-quarter earnings right around the corner, S&P 500 companies are cutting their outlooks at levels not seen since the first quarter of 2016, when corporate America was in a profits recession. According to FactSet, 98 companies have offered guidance, of which 74 have provided a negative outlook [meaning they expect earnings to come in below Wall Street estimates] and 24 companies have been positive. The 76 percent negative-to-positive balance is above the long-term average of 71 percent. Moreover, it comes at a pivotal moment as the Dow Jones industrial average and the S&P 500 both hit records as noted earlier. 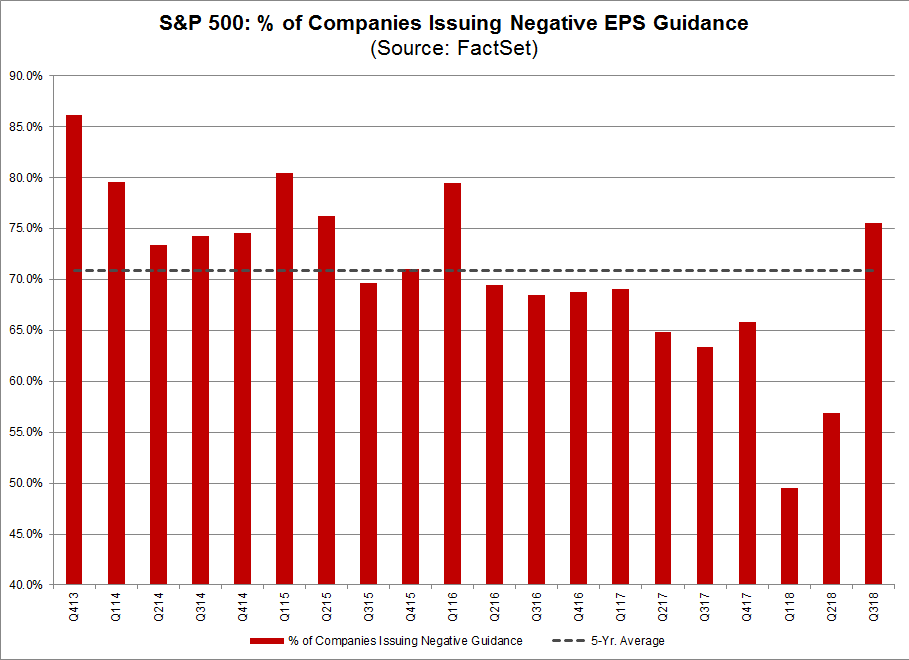 A Look at Market Expectations for Q4 and 2019

Earnings have been on a roll lately, with both the first and second quarters posting growth rates around 25 percent, but those growth rates are expected to diminish. The third quarter is projected to come in at 19.3 percent while the fourth quarter likely will slow to 17.3 percent, resulting in a full-year rate of a robust 20.4 percent, FactSet estimates. In 2019, those numbers change to 7.1 percent and 7.3 percent for the first two quarters and a full-year rate of 10.3 percent. While that is still a healthy growth rate, investors need to be attuned to changing expectations and what that might mean for the stock markets which are forward-looking. With the equity markets basing much of their prolonged rally in 2019 on surging profits, a healthy period of consolidation may occur, so stay tuned and buy more popcorn for what may be an exciting second game.

The divergence of stock markets performance between the U.S. and rest of the world has widened in recent months as global growth has become less synchronized and trade friction has intensified. Continued deregulation, aggressive share buybacks, and late-cycle fiscal stimulus have helped fuel U.S. outperformance which may continue, so stay tuned. 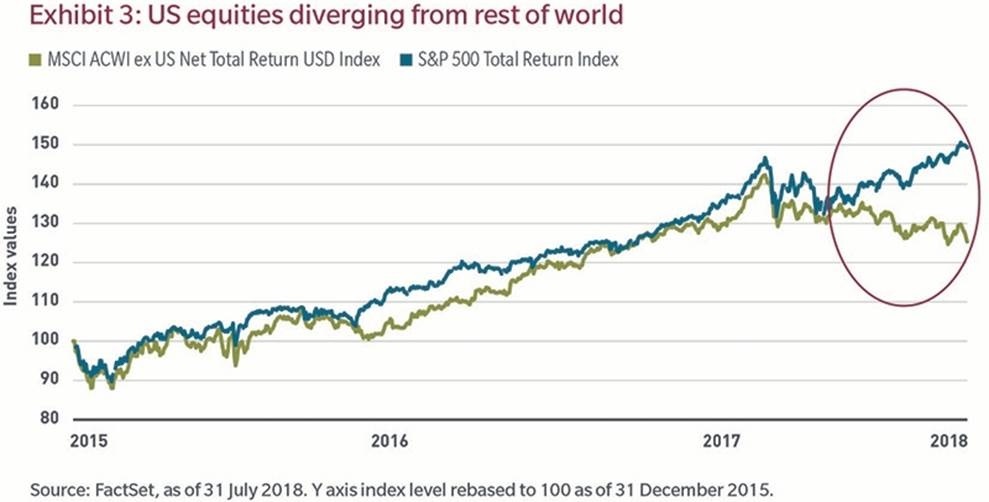 Looking ahead, Investors will be on guard for fallout from Italy’s budget debate and they will also be waiting to see if President Trump makes good on the promise to accelerate the next $267 Billion in tariffs on China. With the start of the final quarter of 2018, investors will be watching for earnings pre-announcements and there will be the typical deluge of economic data the market receives at the start of each new month. China’s markets are closed all week for holiday.

Need Help with Financial Planning and Navigating the Road to Retirement?

Schedule your complimentary and valuable consultation with a member of the Castle Financial team. Email or call us today at (732) 888-4994.

You can also take advantage of the many valuable updates and videos in our Resource Center and on the Castle Financial blog.