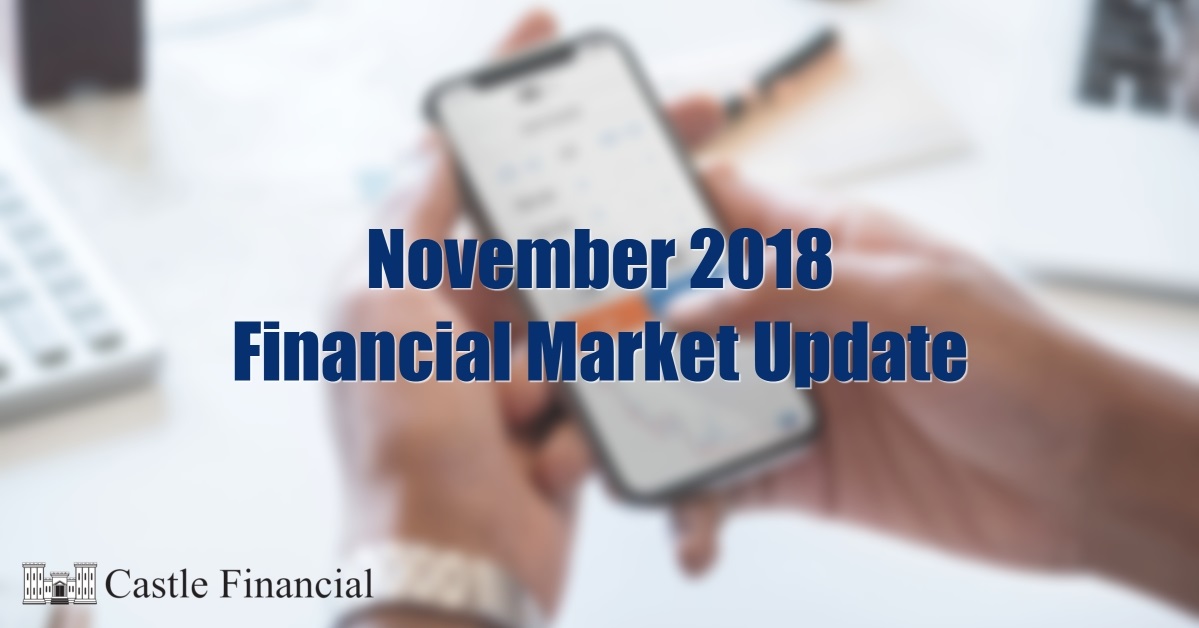 October Delivered Some Tricks, But Also Lots of Treats!

October was a historic month for the bull stock market with the S&P 500’s 7% decline. This was the worst drop since September of 2011 when we were in the midst of the European sovereign debt crisis and about the time Standard & Poor’s downgraded the United States AAA credit rating. The Nasdaq 100’s 8.7% monthly decline for October 2018 was the worst since November 2008. It is the index’s worst decline of the bull stock market run since that time.

The major stock market indices rose last week. Investment sentiment improved as the Russell 2000 index gained 4.33% last week. It was followed by the Nasdaq 2.65% increase, S&P 500 2.42% gain and the Dow Jones Industrial Average moving 2.36% higher. Several factors, including strong corporate earnings and job gains, influenced the upturn. Disappointing earnings reports tended to be company-specific, such as Apple reporting better-than-expected earnings even though iPhone shipments were lower than estimates. Apple stock declined 6.6% as the company announced changes in reporting structure to shift investor focus to the growing application and services revenues rather than new sales. Starbucks rose 9.7% on positive earnings trends in the U.S. and China, and new growth initiatives.

On earnings conference calls, business executives have voiced mixed reactions to the impact and uncertainties related to trade tariffs. Trade issues with China took center stage after President Trump and Chinese President Xi Jinping spoke by phone on Thursday. The leaders will also meet privately during the G20 meeting later this month in Buenos Aires, Argentina. President Trump has reportedly asked key U.S. officials to begin drafting potential terms to stop the escalating trade conflict. The process may be similar to the truce negated in July with European Commission President Jean-Claude Junker. However, President Trump’s economic adviser Larry Kudlow stated, “there’s no massive movement to deal with China, and we are not on the cusp of a deal” which I think was a “good cop/bad cop” negotiating tactic.

Trade data has received of late from the ghouls in the media looking to play up trade war impacts, but I think they are missing the forest from the trees. Yes, the trade deficit widened in September to $54.0 billion as imports rose more than exports. However, what matters more than the headline trade deficit number (which you will not hear about as much) is the total volume of trade - imports plus exports - which signals how much businesses and consumers interact across borders. Based on that data, U.S. trade hit a new record all-time high in September! This increase is the opposite of what we would expect in a trade war.

Regarding the trade deficit in September, exports rose by $3.1 billion, while imports rose by $3.8 billion. Exports of soybeans, which have been given lots of negative attention because they have been a target of Chinese tariffs, were down again in September. Year-to-date, however, soybean exports are up nearly 30% compared to last year, suggesting farmers are finding other markets. Overall, in the past year exports are up 7.2%, while imports are up 9.8%, signaling very healthy gains in the overall volume of international trade and easily outstripping the pace of nominal GDP growth.

While many are worried about protectionism from Washington, I think we are witnessing a trade skirmish and the odds of an all-out trade war with China that noticeably hurts the U.S. economy minimal. I believe what will ultimately come from all the chaos will be better trade agreements for the United States (similar to the re-negotiated NAFTA deal recently struck with Canada and Mexico). America’s negotiating position continues to strengthen, especially because of the rise of the U.S. as an energy powerhouse. As recently as 2005, the U.S. was importing more than ten times the petroleum products that we were exporting. As of September 2018, imports are down to 1.3 times exports and steadily declining. This decline reduces the U.S. reliance on foreign trade partners, which lowers their bargaining power and shifts power dynamics on a global scale (witness the political turmoil in Saudi Arabia). I will continue to watch trade policy as it develops but  not see any reason to sound  bells at this time.

Another treat in October was that automakers reported they sold cars and light trucks at a surprisingly strong 17.6 million annual rate, up 0.7% from September. Of course, the upcoming holiday spending season will be a big treat for retailers and further boost the U.S. economy!

Treats in the Job Market

The creation of 250,000 new jobs in October easily exceeded the estimates of 208,000. Unemployment remained at low at 3.7%, and wages rose at a 3.1% annual rate while more people are re-entering the workforce!

In meetings with several auto and truck dealers last week, we heard manufacturers and suppliers express positive sentiment. Many, however, decried their low stock prices, while some announced an increase in their corporate stock buyback programs to take advantage of significantly undervalued stock prices. The resumption of corporate stock buybacks has no doubt contributed to last week’s market recovery. As the stock buyback “blackout period,” before corporate earnings announcements, is starting to be lifted, I expect this support pillar under the equity markets will help to drive stock prices higher.

This week, all eyes will be watching the election results for potential leadership changes in Congress. Elsewhere, the technology sector appears to be trying to form a bottom following the sector’s decline into correction territory with former market leaders Amazon and Netflix falling into market territory. Yes, investors are worried about the technology stock sector selloff, trade tensions and other factors, such as rising interest rates and an increasingly strong dollar.

However, on the “treat” side, future improvements in the geopolitical landscape over the next few months could increase investor confidence. In past updates, I have alluded to possible “doubleheader” bull stock markets with another bull stock market run following an intermission. I am sure you will agree that the October stock market drop qualifies as a “rowdy” intermission. I think investors will again begin to focus on the strong U.S. economy, great corporate profits and pro-business administration in the White House and do not forget about the seasonal strength of stock markets form the Fall to Spring and, of course, the Santa Clause rally.

With about three-quarters of the constituents of the S&P 500 Index having reported for their third quarter, blended earnings-per-share growth is running at nearly 25%, matching the extraordinary pace of the first two quarters of the year. Revenue growth has moderated slightly, running at an 8.5% year over year, down from last quarter's 10% growth. Profit margins, however, are running at a 12% rate, a record and the chart below notes that the long-term trend in the S&P 500 remains higher even after the October correction. 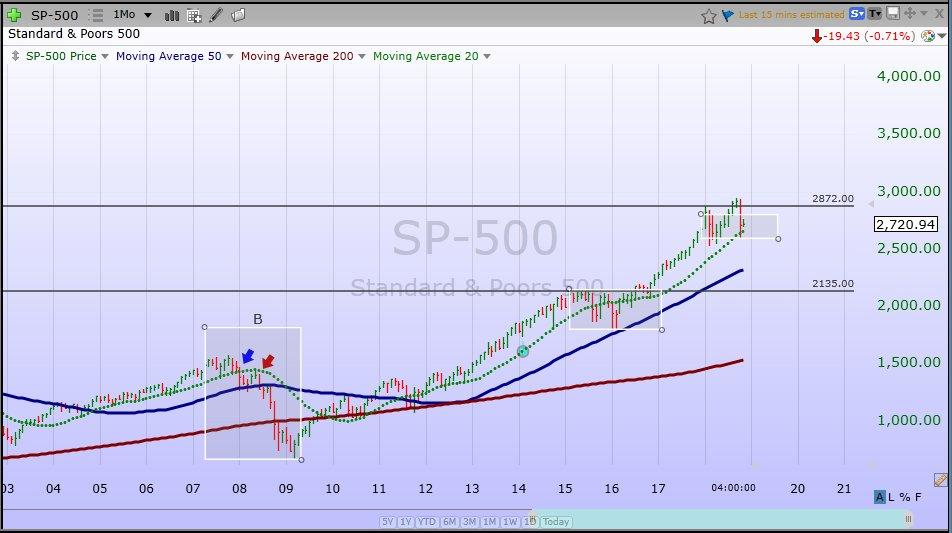 The bull stock market that started in 2009 has experienced a handful of corrections over the past nine-plus years. Going back to 2012, there were five prior corrective episodes where the S&P 500 declined approximately 10% or more and, on average, it took 25 days for the correction to reach its trough. This past October correction took about 26 days. The days to recovery, which I define as a close 7% or more above the low tick of the move (that did not reverse back below the low), took 17 days on average. The shortest number of days to recovery was 8 days, which was registered following the volatility explosion earlier this year in February. However, in reality, the stock market traded sideways for two months re-testing the low a couple of times but then went on to make new all-time highs at the end of September 2018. We cannot rule out the possibility that last Monday marked the low and it is an all-clear situation, but that is a highly unlikely situation. We came into this correction with the headwinds of a trade war, rising interest rates and investors can now add disappointing earnings from some of the key market leaders to that list. Headwinds have not likely abated and the list is getting longer, but I think we will see many issues get resolved over the months to come, but volatility will be with us well into the new year.

At this time, I believe there is no need for panic, and we are monitoring the markets very closely to determine if this recent correction is an opportunity or will evolve into something to become more concerned about.

Fortunately, Castle Financial is Co-Advisor on the All Terrain Opportunity Fund which can potentially make money in both up markets and also in a bear stock market if we enter a more prolonged period of lower stock prices. Rest assured we are monitoring situations very closely and are proactively managing our valued clients’ accounts to achieve their long-term financial goals.

Need Help with Financial Planning and Navigating the Road to Retirement?

Schedule your complimentary and valuable consultation with a member of the Castle Financial team. Email or call us today at (732) 888-4994.

You can also take advantage of the many valuable updates and videos in our Resource Center and on the Castle Financial blog.